Shigeru Ban has released plans for his “Nepal Project”—modular, wood-framed structures that can be assembled quickly and easily, to house victims of this April’s devastating earthquakes in Nepal that left hundreds of thousands homeless.

Ban’s design calls for 3-by-7-foot wooden frames, filled with rubble bricks. After securing a plastic sheet on top of the paper-tube roof truss (Ban’s signature material), people can simultaneously inhabit and build the structures by stacking additional bricks inside the frames.

The architect drew inspiration from a visit to the area at the end of May. “While looking at the traditional Nepalese houses that were not collapsed,” he writes on his website, “I noticed the presence of carved wooden frames embedded within the brick walls.” The wooden frames provide the primary structural support, while “the masonry itself functions as a secondary structural system,” he says.

The first prototypes of Ban’s design are scheduled to be constructed by the end of this month.

In 1994, Ban worked with the UN Refugee Agency to design a paper tubing structure using plastic connectors in Rwanda. He employed a similar technique in Haiti after the 2010 earthquake, this time using plywood connectors with paper tubes. 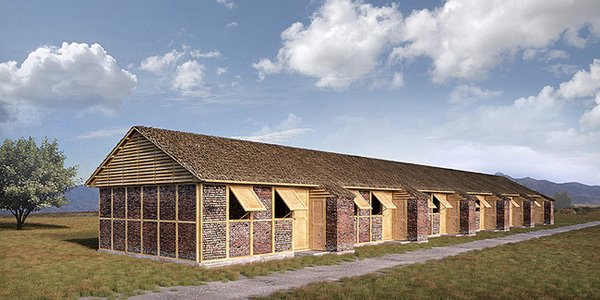 Ban received the Pritzker Prize in 2014. Citing his “for the homeless and dispossessed in areas that have been devastated by natural disasters,” jury chairman Lord Peter Palumbo called Ban a “force of nature,” going on to note the architect’s “profound knowledge of his subject with a particular emphasis on cutting-edge materials and technology” and “endless innovation.”